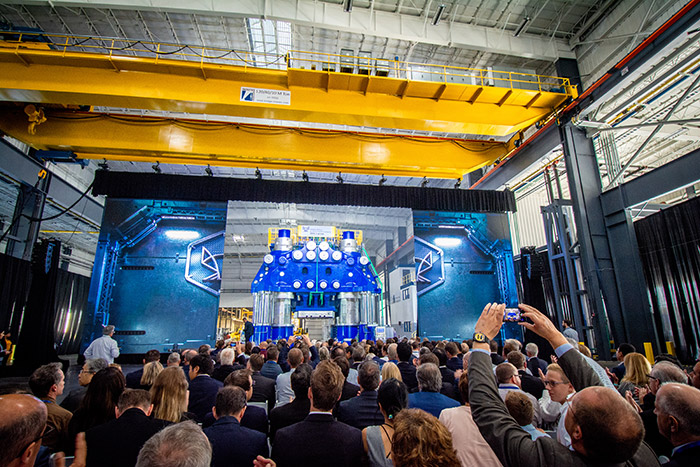 As a result, Weber will double its local employment to 800 jobs, which is expected to have the economic impact of creating more than 2,000 jobs in the surrounding
community.

The state of California contributed $20 million in tax credits to the project. “This innovative technology will literally forge the future for parts made for aircraft and spacecraft,” said Dr. Hinrich Mählmann, Managing Partner of Otto Fuchs KG. “This, the world’s largest pulldown forging press, will shape some of the world’s largest monolithic parts from both aluminum and titanium. For Otto Fuchs, this is the third time we have developed the world’s largest forging press and the second time it has been on Weber’s property,” he added. Speaking for Weber Metals, Doug McIntyre, Weber Metals President and CEO, said that the new press addresses the demands and expectations from the company’s customers for larger, more sophisticated monolithic titanium and aluminum parts that reduce both weight and complexity. This helps aircraft and aerospace companies improve their environmental efforts, which is a priority for Otto Fuchs and Weber Metals. “Environmental sustainability is a priority for both companies,” said Dr. Klaus Welschof, Head of the Otto Fuchs Aerospace Division. “Green product design reflects the efforts by both of our companies to help reduce carbon footprints for commercial aircraft. It also connects with another of our commitments: improving the mobility of people everywhere through better aircraft design.” Groundbreaking for the new facility was in April 2014, and construction started in January of 2017 when the first press piece arrived on site. The machine is nearly 10 stories tall, and only one-third of it is visible the other two-thirds are below ground level. Weber Metals’ first production part will be for Boeing’s main landing gear beam on the Boeing 737 MAX aircraft.

The new press represents the continuing success and growth of Weber Metals in Southern California, contributing to a strong local economy with engineering and manufacturing jobs. Weber Metals started in 1946 with Edmund L. Weber and a handful of employees. Otto Fuchs acquired Weber Metals in 1978 when there were 30 employees.